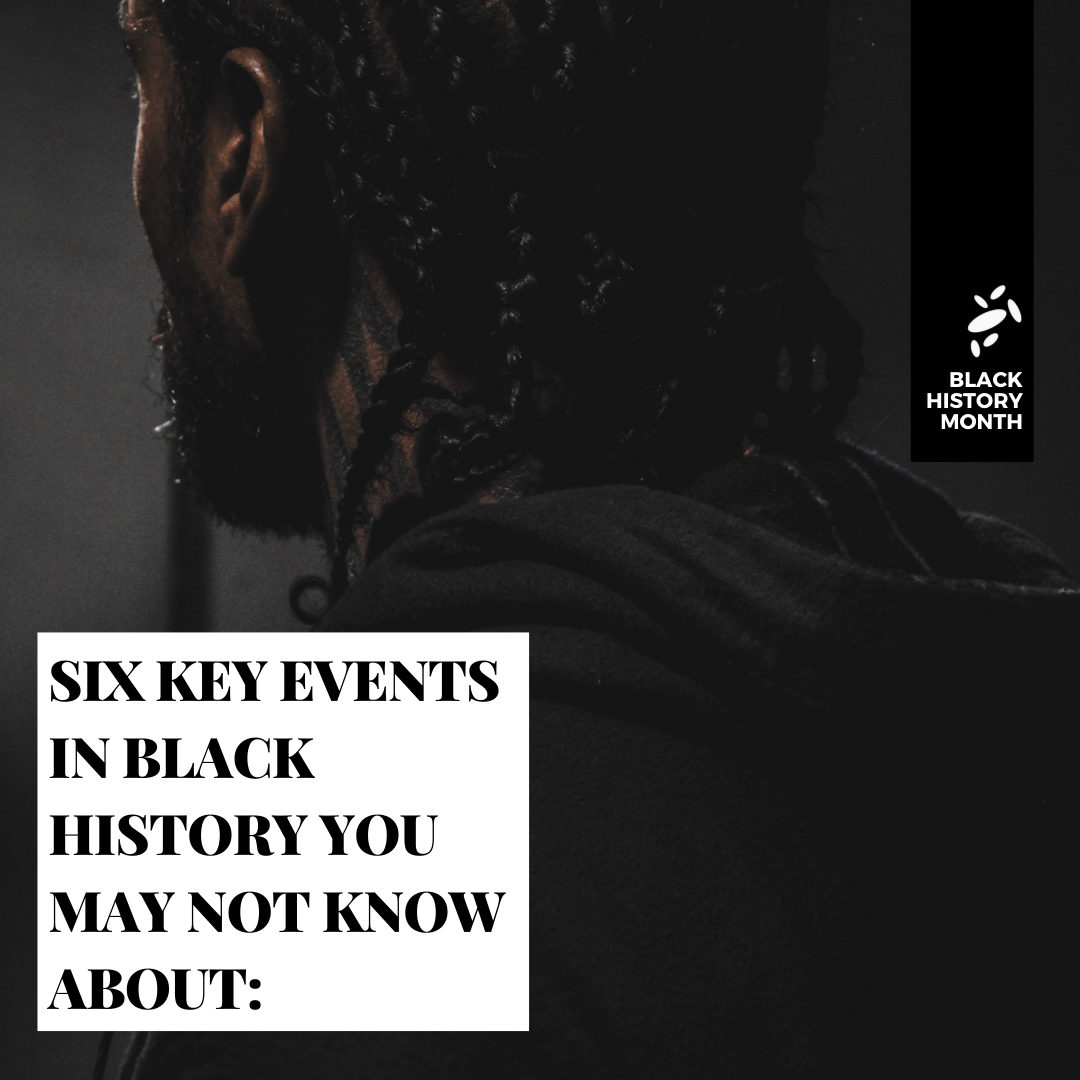 Here, we look at six key events in black history which you may have not heard of, as highlighted by Prof Kehinde Andrews, who teaches Black Studies at Birmingham City School of Social Sciences.

A slave rebellion may have ended slavery itself

The abolition of slavery happened in Britain in 1807, although the move by Parliament was preceded by years of rebellion from the slaves themselves.

The events in Haiti between 1791 and 1804 are seen as the only successful slave rebellion in history. Known then as St Domingue, the French colony was the richest source of sugar in the Caribbean.

When the slaves burned down the sugar plantations, it led to such a loss of income that in 1803, the country’s leader, Naploeon, sold French-owned Louisiana territory to US president Thomas Jefferson in what became known as the Louisiana Purchase. It almost doubled the size of the United States.

Prof Andrews says Haiti isn’t talked about as much as it ‘goes against the narrative’ of how slavery came to be abolished. He said: “We like to have it that Britain was good, and benevolent, and that’s how we ended slavery. That’s not true. Haiti was free in 1804. It’s 1807 when Britain abolished the slave trade but it doesn’t abolish slavery itself. It continued until about 1838 in British colonies. The abolition was about fear of rebellion, not benevolence.”

Before 1965 and the establishment of the Race Relations Act in the UK, there was nothing in law to prevent racial discrimination when hiring people for jobs.

In 1963, the Bristol Omnibus Company refused to employ any Black or Asian workers. There was an outcry, leading to a four-month boycott before the bar on applicants of colour was lifted. The boycott, led by members of the West Indian community, was inspired by the refusal of civil rights pioneer Rosa Parks to give up her seat on a segregated bus in Alabama, USA, in 1955.

Prof Andrews said: “ It was perfectly legal before the Race Relations Act to not hire someone if they were Black or Asian. Black people were told passengers wouldn’t feel safe riding with them and that other people wouldn’t want to work with them. There was nothing anyone could do.”

The boycott was seen as catalyst for the Race Relations Act to be established.

Race Riots in the UK

The rebellions against the death of George Floyd across American and other parts of the world are not unique. They have happened throughout history, including ones linked to specific events in the UK.

In 1919, following the end of the First World War, there were race riots in many port cities in the UK. These riots weren’t started by black communities, instead they were formed against them. Prof Andrews was part of the 2019 commemorations behind the centenary of the riots, which he says are rarely talked about.

When servicemen returned from the front to begin their lives again, some believed that immigrants from Africa, the Caribbean and other parts of the world, were denying them jobs and homes. Resentment built to the extent there were four days of rioting in Cardiff in which three people died. In Liverpool, an angry mob chased one man, Charles Wotten (also known as Wootton) – a sailor born in Bermuda – down to the docks, where he later died.

There have been further race riots in the UK since. Violence flared between the white and West Indian community of Notting Hill in London in 1958. There were also incidents in the 1980s, in towns and cities such as Brixton, Bradford, Birmingham, Bristol and Liverpool.

Dr Martin Luther King was a civil rights campaigner who believed in non-violent forms of protest. He was awarded the Nobel Peace Prize in 1964 and was also involved in Rosa Park’s 1955 bus boycott. When he was assassinated in 1968, it was a watershed moment for the civil rights movement in the US. The death of a non-violent man led to riots across the USA.

Prof Andrews said: “This really started the Black Power era in the USA. It was there before but the death of Martin Luther King sparked it off in a big way. The Black Panther Party was formed in 1966 and was relatively small, but after the death of Martin Luther King, it grew. They believed they couldn’t rely on the current systems being reformed, so they became more militant. They wanted to end segregation and bring in race relation legislation.”

The killing of Emmett Till

In 1955, teenager Emmett Till left his Chicago home to visit family in Mississippi. The 14-year-old never returned. He was brutally killed during his trip, allegedly for whistling at a white woman, Carolyn Bryant, who was serving in a store when he went in to buy bubblegum. It was never made clear exactly what happened in the incident which led to his death.

A few days later, Roy Bryant, Carolyn’s husband, and his half-brother, JW Milam, abducted Emmett from his uncle’s home and killed him in horrific circumstances. At their trial, Emmett’s great uncle identified them as the killers, but they were found not guilty by a jury made up entirely of white people. A public outcry followed, especially as the men could also have been charged with kidnapping. They later admitted responsibility in a magazine interview, but said they had done nothing wrong. Nobody has ever been convicted for Emmett’s killing.

Emmett’s mother, Mamie, asked for her son’s coffin to be open as people passed by to pay their respects at his funeral in Chicago. His injuries were severe, but she wanted everyone to see what racism could do.

Prof Andrews said that the image of Emmett in his coffin was graphic, but shared across America. It was an incident which is seen as a spark for the civil rights movement, just as Rosa Park’s bus boycott was in the same year.

In 1965, the US civil rights campaigner visited Smethwick in Birmingham, just nine days before he was assassinated. The speech he gave there was his last away from home.

He was invited there by the Indian Workers’ Association during his travels in Europe. Smethwick was suffering from racial tensions at the time. Its MP had won a seat in the 1964 General Election using a racist slogan. There were also calls for houses in the area’s Marshall Street to be bought up and left vacant to prevent families of colour from moving in.

Prof Andrews said: “We think that kind of racism isn’t here in the UK. It was, a violent kind.

“He said racism wasn’t a local problem. It was a world problem.”