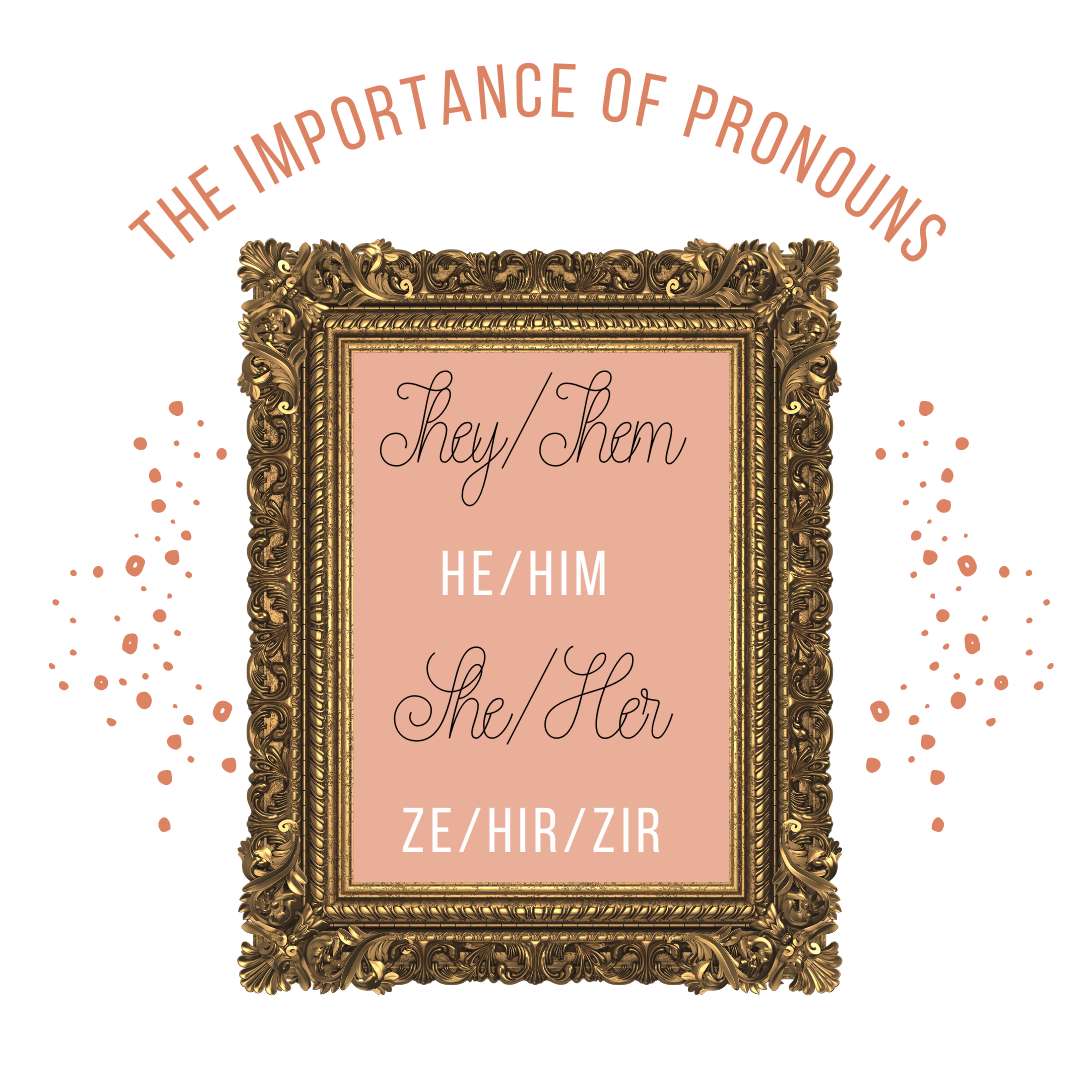 Often, when speaking of a singular human in the third person, these pronouns have a gender implied — such as “he” to refer to a man/boy or “She” to refer to a woman/girl. These associations are not always accurate or helpful.

Often, people make assumptions about the gender of another person based on the person’s appearance or name. These assumptions aren’t always correct, and the act of making an assumption (even if correct) sends a potentially harmful message — that people have to look a certain way to demonstrate the gender that they are or are not.

Why should we use the correct pronouns?

Using someone’s correct personal pronouns is a way to respect them and create an inclusive environment, just as using a person’s name can be a way to respect them. Just as it can be offensive or even harassing to make up a nickname for someone and call them that nickname against their will, it can be offensive or harassing to guess at someone’s pronouns and refer to them using those pronouns if that is not how that person wants to be known. Or, worse, actively choosing to ignore the pronouns someone has stated that they go by could imply the oppressive notion that intersex, transgender, nonbinary, and gender nonconforming people do not or should not exist.

How do I know which pronouns to use?

Singular first person pronouns (that you should continue to use, as is):

“I am a writer and wrote that book myself. Those ideas are mine. Do you like both me and my ideas?”

Singular second person pronouns (that you should continue to use, as is):

“You are a writer and wrote that book yourself. Those ideas are yours. I like both you and your ideas.”

Singular third person pronouns (that you should use as appropriate based on the pronouns the person being referred to goes by):

If you’re not sure what pronoun to use, ask. it might feel a little awkward at first, but asking someone what personal pronouns they use helps you from being wrong or making a hurtful assumption.

If you do not know or have not asked someone’s pronouns, try to use “they/them” pronouns

What if I use the wrong pronouns?

You don’t have to make a big deal out of your mistake or draw a lot of attention to it. You mostly need to fix it. You might have a follow up conversation with the person you referred to incorrectly to apologize or see if there’s something else you can do to correct it moving forward besides doing better. Making it a bigger deal in the moment is not necessarily helpful and could be harmful unless that’s what the person who was incorrectly referred to wants. Depending on the situation, you might be worried that people think you aren’t friendly towards transgender people because you made a mistake, but generally it’s good to avoid making the situation about you and your intent. A good way to show you are friendly is to get it right in the future and to act upon some of the other guidances you may find through this website or other resources.

Example 2. You are talking in a meeting about someone who goes by “they/them” pronouns. “His idea for that project is going to work very well. Let’s try that.”

Later, after the meeting, you realize that you used the incorrect pronouns for that person, so you go to them and say: “I’m really sorry I used the wrong pronouns for you in that meeting earlier. I know you go by ‘they/them’ and I will make sure I get it right next time.” You don’t have to linger on the topic if the other person doesn’t want to talk about it further, you can simply work to do better.

Just because a person goes by a certain set or sets of pronouns is not indicative of that person’s gender. A person could be transgender or not transgender (also called “cisgender” – the vast majority of the population is cisgender) and might share the pronouns they go by. A person could be a man or a woman or both or neither and share any number of these sets of pronouns as the correct ones to use for them, but which set they go by is not necessarily indicative of their gender, even though for most people there is an association between the pronouns they go by and the gender they are.

Click on the pronouns below to find out more information about each pronoun set:

“She is a writer and wrote that book herself. Those ideas are hers. I like both her and her ideas.”

“He is a writer and wrote that book himself. Those ideas are his. I like both him and his ideas.”

“They are a writer and wrote that book themself. Those ideas are theirs. I like both them and their ideas.” Please note that although “they” pronouns here are singular and refer to an individual, the verbs are conjugated the same as with the plural “they” (e.g. “they are”). Also note that in this singular pronoun set many use “themself” rather than “themselves,” although both are typically acceptable.

“Ze is a writer and wrote that book hirself. Those ideas are hirs. I like both hir and hir ideas.” Please note that “ze” is usually pronounced with a long “e” and that “hir” and its forms are usually pronounced like the English word “here.” Some people instead go by “ze/zir” pronouns because of the more consistent pronunciation and spelling

“Lan is a writer and wrote that book. Those ideas are Lan’s. I like both Lan and Lan’s ideas.” If the reflexive component was important to communicate a message, you could use alternative language such as “Lan wrote that book unassisted” or “Lan was the sole author of that book.” Some might simply say “Lan wrote the book Lan’s self.”

The vast majority of people go by the pronouns sets “he/him” or “she/her.” A small but increasing number of people use “they/them” pronouns or another pronouns set — sometimes simply because they don’t want to go by pronouns with a gender association (just as some folks go by “Ms.” whether or not they are married, because they don’t think their marital status should be a relevant issue), and sometimes people use pronouns that aren’t associated with one of those two most common (binary) genders because they are nonbinary (i.e. people who are neither exclusively a man nor exclusively a woman — e.g. genderqueer, agender, bigender, fluid, third/additional gender in a cultural tradition, etc.).

A great way to create and normalise space for people to share their pronouns is first to share your own. You can do this by saying, for example, “Hi, my name is Farida and I go by the pronoun ‘she’” or “I’m Yoshi and I’m referred to by ‘he/him’ pronouns.”

Sharing your own pronouns is a great idea, but it isn’t requisite. Keep in mind, however, that there is a privilege of appearing in a way that fits both your gender and the pronouns that many people associate with your gender. In other words, if people’s assumptions are correct, never having to name those assumptions begins to normalise the very process of making assumptions (which for others may be incorrect). Thus, sharing pronouns is a great way to disrupt the normalisation and privilege of assumption.

How to use gender inclusive language

This reference is meant to provide you with very basic pointers and replacement language to help avoid gender assumptions in your language. Although you might not mean harm, using language that assumes another person’s gender or pronouns (if that person has not shared the gender or pronouns to use) can cause harm, as can using language that erases some people’s genders by implying there are only two genders (or that only a certain gender is qualified to do a particular job).

Many people have already made the shift in their language to avoid “that’s so gay” as a derogatory phrase or to avoid assumptions about sexual orientation (e.g. asking a woman if she has a boyfriend). Many people have stopped using “he” as a universal language to refer to all people, or to exclusive “he” language or “she” language to refer to all fire fighters, all flight attendants, all doctors, all nurses, all administrative assistants, all college students, etc.

Similarly, we need to shift our language to avoid further assumptions that particularly harm transgender and gender nonconforming people. Small changes in language can make a big difference in peoples lives.

Instead of “yes, sir” or “thank you, ma’am” or other language that makes gender-based assumptions, you could simply communicate:

Instead of calling upon or remarking about a particular “man” or “woman” (who has not disclosed that identity), you could indicate:

Instead of “ladies and gentlemen” or “boys and girls” or other language that assumes only two genders, you could use:

Instead of “he or she” or “s/he” (when speaking of an unknown or universal person) you could communicate:

It is fine to use singular pronoun “they” as a way to refer to a specific person who goes by the pronoun “they” or to colloquially refer to a single person of unspecified gender. However, it may not be the best choice of language for a policy or technical writing in which a reference to a single person must be absolutely clear. In this case, instead of writing “he or she” or “s/he” or even “he/she/they” or “they,” it may be best to instead simply repeat the noun: the complainant, the representative, the member, the person, etc. That way, there is total policy clarity. There are also ways to edit sentences to avoid unnecessary repetition.

Instead of “men and women,” you could communicate (depending on what you mean to construe):

Kidderminster College support Visibility, Unity and Equality. We believe that everyone is entitled to and deserves to find their place in this world

If you need to talk to someone, our KC Safeguarding Team and Student Services are always on hand. Either pop to reception and ask for a team member, or drop our safeguarding team an email on staysafe@kidderminster.ac.uk